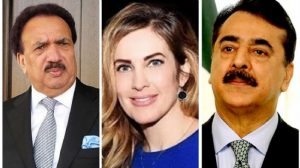 She blames PPP a political party for links with anti-state activities after rape accusation.

She holds a Bachelor degree with a major subject in Criminal Justice from Louisiana State University while She did Master of Education with a concentration in subject Psychology from the same university in 2005. After completing her studies, she claims about degrees from Pepperdine University then The George Washington University, but she had gotten few certifications from these institutes, but not any formal degree which should be done.

In this connection, she used to do public relations jobs between 2006 and 2009 and later on worked briefly at a computer and phone business in the same. She did last employment in Houston as a senior official at a houston.

Moreover, she took over charge as CEO of Kulture Inc. in 2017, and two years later the company’s status was reported as suspended due to unknown reason. Additionally, she also set up another company – ‘A Different Lens Production’ – in 2017, but it too was suspended by authorities in the US sometime in 2019 due to non availability of any symbol of reason.